One of the defining features of London is that it is a city of contrasts. Although it is considered one of the richest cities in the world, over a million Londoners are living in relative poverty, even before the additional costs of living in the capital are considered.

This edition of Focus on London, authored by Rachel Leeser, presents a detailed analysis of poverty in London that reveals the scale and distribution of poverty in the capital.

Read the full report as a PDF. 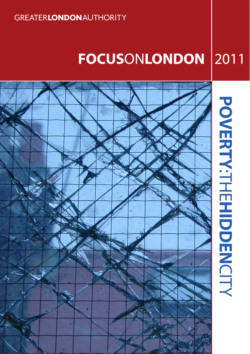 What do we mean by living in poverty, and how does the model affect different types of families? This interactive presentation provides some clarity on a complex concept.

The motion chart shows the relationship between child poverty and worklessness at borough level, and shows how these two measures have changed since 2006. It reveals a significant reduction in workless households in Hackney (down 12 per cent), and to a lesser extent in Brent (down 7 per cent).

The bar chart shows child poverty rates and the change in child poverty since 2006. It reveals that while Tower Hamlets has the highest rate of child poverty, it also has one of the fastest falling rates (down 12 per cent), though Haringey had the biggest fall (15 per cent).

All the data contained within the Poverty: The Hidden City report as well as the data used to create the charts and maps can be accessed in this spreadsheet.

● Highest proportion of children in workless households, by borough, 2010

● Changes in proportions of workless households, 2006-09, by borough