Focus on London - Population and Migration

This report was released in September 2010. However, recent demographic data is available on the datastore - you may find other datasets on the Datastore useful such as: GLA Population Projections, National Insurance Number Registrations of Overseas Nationals, Births by Birthplace of Mother, Births and Fertility Rates, Office for National Statistics (ONS) Population Estimates

London is the United Kingdom’s only city region. Its population of 7.75 million is 12.5 per cent of the UK population living on just 0.6 per cent of the land area. London’s average population density is over 4,900 persons per square kilometre, this is ten times that of the second most densely populated region.

Between 2001 and 2009 London’s population grew by over 430 thousand, more than any other region, accounting for over 16 per cent of the UK increase.

Population and Migration report is the first release of the Focus on London 2010-12 series. Reports on themes such as Income, Poverty, Labour Market, Skills, Health, and Housing are also available. 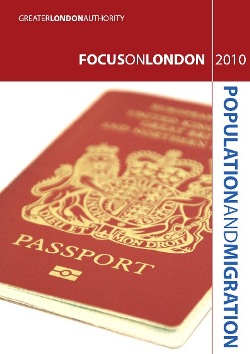 To access an interactive presentation about population changes in London click the link to see it on Prezi.com

To access a spreadsheet with all the data from the Population and Migration report click on the image below.

To enter an interactive map showing a number of indicators discussed in the Population and Migration report click on the image below.

● In 2009, Barnet overtook Croydon as the most populous London borough. Prior to this Croydon had been the largest since 1966

● In 2008-09, natural change (births minus deaths) led to 78,000 more Londoners compared with only 8,000 due to migration. read more about this or click play on the chart below to reveal how regional components of populations change have altered over time.