Daytime population - The estimated number of people in a borough in the daytime during an average day, broken down by component sub-groups.

The figures given are an average day during school term-time. No account has been made for seasonal variations, or for people who are usually in London (resident, at school or working), but are away visiting another place.

The figures published in these sources have been used exactly as they appear - no further adjustments have been made to account for possible sampling errors or questionnaire design flaws.

Day trip visitors are defined as those on day trips away from home for three hours or more and not undertaking activities that would regularly constitute part of their work or would be a regular leisure activity.

International visitors – people from a country other than the UK visiting the location;
Domestic overnight tourists – people from other parts of the UK staying in the location for at least one night.
All visitor data is modelled and unrounded.

This edition was released on 7 October 2015 and replaces the previous estimates for 2013.

See a visualisation of this data using Tableau. 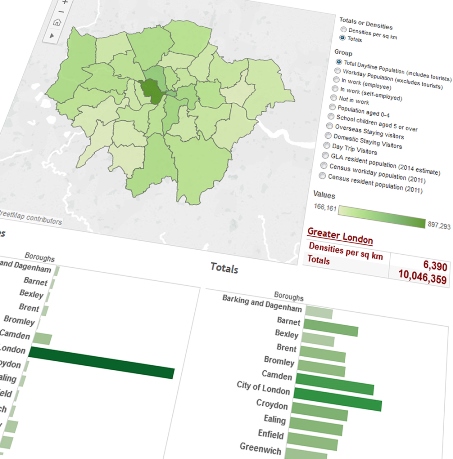