Focus on London - Income and Spending

Household income in London far exceeds that of any other region in the UK. At £900 per week, London’s gross weekly household income is 15 per cent higher than the next highest region. Despite this, the costs to each household are also higher in the capital. Londoners pay a greater amount of their income in tax and national insurance than the UK average as well as footing a higher bill for housing and everyday necessities. All of which leaves London households less well off than the headline figures suggest.

This chapter, authored by Richard Walker in the GLA Intelligence Unit, begins with an analysis of income at both individual and household level, before discussing the distribution and sources of income. This is followed by a look at wealth and borrowing and finally, focuses on expenditure including an insight to the cost of housing in London, compared with other regions in the UK.

See other reports from this Focus on London series.

To view the report online click on the image below. Income and Spending Report PDF 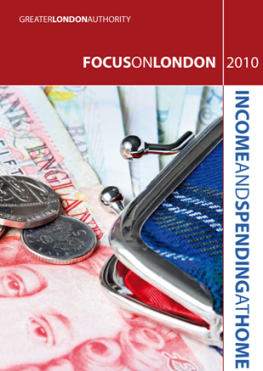 This interactive presentation finds the answer to the question, who really is better off, an average London or UK household? This analysis takes into account available data from all types of income and expenditure. Click on the link to access.

The Prezi in plain text version 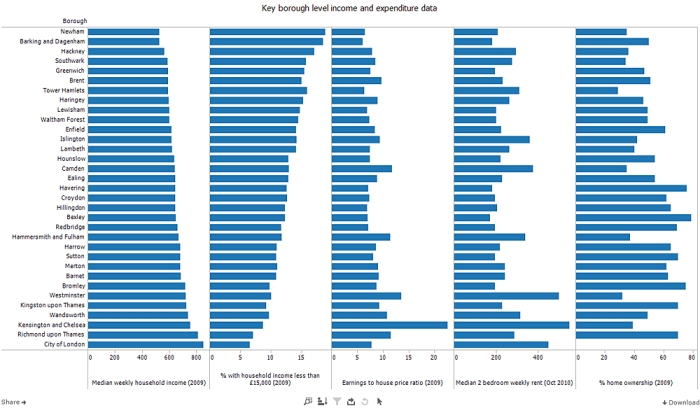 This interactive chart shows some key borough level income and expenditure data. This chart helps show the relationships between five datasets. Users can rank each of the indicators in turn.

These interactive borough maps help to geographically present a range of income and expenditure data within London.

All the data contained within the Income and Spending at Home report as well as the data used to create the charts and maps can be accessed in this spreadsheet.

● Five boroughs with the highest median gross weekly pay per person in 2009:

● Five boroughs with the highest median weekly rent for a 2 bedroom property in October 2010:

● Five boroughs with the highest percentage of households that own their home outright in 2009: